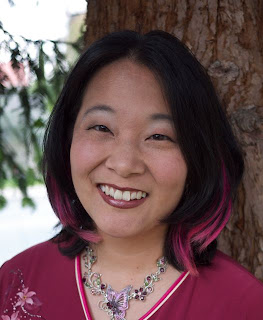 This month we meet Camy Tang.  We've been friends for years, and she has accompanied me on several of my DestiKNITions adventures.  Here she is:

Camy, what’s on your needles right now?
I’m still knitting a beautiful lace shawl for one of my Street Team members who won it in the last contest! It’s taking longer than I expected but I hope she’ll like it. She essentially said, “Surprise me!” so I’m making something extra special!

What feels like your favorite/greatest knitting accomplishment?
My parents’ family crest afghan. I had to make the intarsia pattern myself from photocopies of our families’ crests. It wasn’t hard, but it was a bit tedious, and my parents were really touched by the afghan present.
DestiKNITers, if you want to see Camy's stunning afghan (I know I did) click here on Ravelry or here for the pics on Flickr.

What feels like the worst knitting mistake/foible/wrong choice you’ve ever made?
I bought this luscious alpaca chunky yarn and made this pretty sweater that looked awful on me because of my wide hips, which was where the pattern was on the sweater. I don’t know why I didn’t catch that before I had knit the entire thing. I still can’t bear to look at the yarn again after I unraveled it all. :P

Straight or circular needles?
Definitely circs! I’ve snapped so many wooden straight needles it’s not even funny. My butt unerringly will sit on it no matter where I am.

Metal or wood needles?
I used to be an all-wood gal, but lately I’ve been using more metal needles for socks and sweaters since I’m using more wool, and metal seems to make the knitting easier without sticking. I’m very partial to the Knitpicks.com needles.

White chocolate, milk chocolate, or dark chocolate?
Dark, but don’t hate me--I’m not a huge chocolate fan. I’ll eat it and enjoy it, but I tend to choose fruity desserts rather than chocolatey, even during those times of the month.

Coffee or tea?
TEATEATEATEATEA!!!! My favorite tea purveyor is Lupicia, which is based in Japan but they have shops in the US and a US website: lupiciausa.com Their chocolate strawberry puer tea is TO. DIE. FOR. 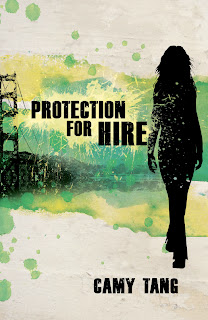 Have you written a knitting character?
Normally no, because there’s not much place for knitting in my Love Inspired Suspenses, but in my humorous romantic suspense, Protection for Hire, the hero’s mother knits and teaches my heroine. :)

What’s the last thing anyone would suspect about your most recent book?
I actually had to use my husband for some of the fight scenes. He likes watching UFC and mixed martial arts, so I asked him how my heroine would take down a 250 pound man, and he explained a few moves she’d probably do, and showed me some video footage of televised fights to show the moves in real life. It was quite a bonding moment. :)

Give a shout out to your favorite local yarn store:
Green Planet Yarn
368 E Campbell Ave
Campbell, CA 95008
408-871-9196
greenplanetyarn.com
Super nice folks there and all the yarn is earth-friendly! They also have a free knitting doctor who has open hours there every week.

Be sure to drop by Camy's website to learn more about this fun author.

Up next, the final post for the amazing alligator!
Posted by Allie Pleiter at 12:30 AM

Thanks for the spotlight, Allie! It's always fun to connect with other knitters and readers!
Camy

I can't knit even if my life depended on it. I can crochet up a storm though. :) Maybe Tessa Lancaster will have to use a knitting needle to ward off an enemy in the future in one of the series books. This is a nice interview showing a different side of a multi-faceted Camy Tang. Thanks.

LOL Thanks Susan! I've only recently begun to learn to crochet, learning from online videos just like I learned to knit!

Get the adventures emailed to you!