Relentless...
Yes, I changed my mind.  I took a look at my schedule and for various reasons it made more sense to do these mitts first and save the Super Scarf for my trip to the Kentucky Book Fair in November.
So after careful consideration, I embarked on the fingerless mits of Susan’s design from Mass Ave Knits.  Now I have been called “persistent” many times.  Actually, I’ve been called “relentless,” although that doesn’t sound nearly as virtuous as persistent.  In truth, I am both.  So it made perfect sense to continue my strategy of doing both items of anything that came in pairs simultaneously.  After all, if you can do two socks on one circ, can’t you do two mitts?
Sounded plausible, until I realized these mitts have a left and a right.  That stopped me in my tracks.  Until my engineer husband looked at me and said, “so just do both sets of directions at the same time.”  Just like that.  Like it’d be a piece of cake for someone with a decent intellect.  In response, and in a decision I might come to deeply regret sometime in the near future, I agreed.  Two sets of directions at one time? How hard can it be? 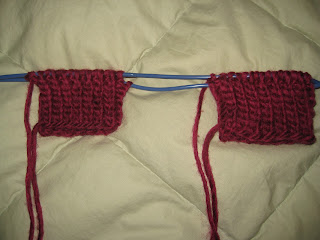 The last time I asked “How hard can it be?” I ended up a romance author.  I have a very colorful history with that question.  Those with delicate constitutions might just want to stop following this blog and go spend that time at LOLCATS.com or something.  I decided to use my Denise interchangeable needles so that if I had to shift stitches like I did on the Comin Round the Mountain socks, I could separate the cable to make adjustments (see?  I learn from my mistakes.).  Granted, I’ve only gotten as far as the first eight rows of ribbing, but its going fine. 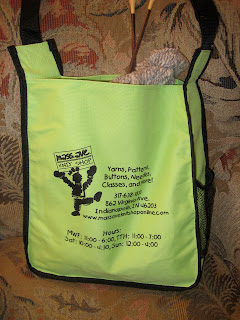 Now I get to introduce a new feature at DestiKNITions:  the giveaway!  Every comment posted during the installments of this Knit-Along will get an entry in a drawing for this exceedingly cool knitting bag from Mass Ave Knit Shop.  Nice and deep, a clever shoulder strap, and places for your pen, highlighter, and Frappuccino bottle.  As an added bonus, I’ll tuck a copy of my most recent novella Bluegrass Easter inside.  The novella features a knitting librarian sheep farmer as the charming heroine.

Play nice now, only one comment per person per episode.  Still, with a six-episode Knit Along like this you can score yourself six chances to win.  Pretty nice odds!
Posted by Allie Pleiter at 12:29 PM

Sometimes those engineers forget that not every person's brain works like theirs do. Hope you can keep the directions straight as you knit. I'm not sure I'd even attempt it.

So, did you finish those gorgeous socks?

Give some warning! I was going to knit these with you (except in my baby pink alpaca instead! Yum!)

I will start them tomorrow. :)
Camy

Thanks for having the giveaway! Mass Ave Knit Shop is awesome.

Get the adventures emailed to you!